The school bell rings. It’s 3:30 p.m. Class is dismissed. Kyle and I rush to the parking lot. Most kids are (literally) running home to play video games, watch TV, or go back to bed. 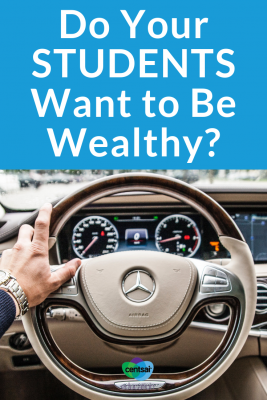 By 3:33 PM, we’re tuning Kyle’s new car, a heavily modified all-wheel-drive, turbocharged Eagle Talon. The exhaust is cackling like a witch and the car is spewing as much black smoke and flames as a forest fire.

I give the car wide open throttle as Kyle uses a laptop to fix our problem. We lean out the fuel mixture and get her running at least a little better. Based on the tuning program, she’ll do a 12-second quarter-mile for sure. A few minutes later, we skid into the parking lot. I jump out and run to my car – it’s time for work. Play hard, work hard.

This was a typical day for us. Kyle and I knew money was necessary to live the lifestyle we wanted to live.

They say money doesn’t buy happiness. But money would buy our dream lifestyle.

And isn’t living your dream lifestyle the definition of happiness? Kyle was more into buying material possessions, I was more into saving. A wealthy teen can have either mindset.

Our adrenaline-filled day started much earlier than 3:30 p.m. Kyle got his money in a few ways. His most lucrative source was playing video games. He created World of Warcraft accounts, leveled them up and sold them for an outrageous profit. He also played competitive paintball. If anyone has ever told you that you can’t make money doing what you love…

I earned my income in more traditional ways. I had a job at a restaurant and a vineyard, and I worked for a lot of farmers. The most fun way I made money was flipping car parts on eBay and Craigslist. Before school (and sometimes during – whoops), I would buy and sell car parts. Kyle actually gave me a lot of business.

Kyle and I were both good students. School always came first. We just had to hustle to both make money and make the honor roll. We both wanted to go to college.

Probably the best bang-for-your-buck job is doing well enough in school to get scholarship money.

We didn’t have regular girlfriends. Honestly, that was probably because we saw girlfriends as taking too much time and money. We would only get dates just before a school dance.

A lot of parents tell their kids that, “School is your job.” But wealth-minded teens think bigger than simply school. They must hustle to get good grades and make good money. And it’s that work ethic that I’ve found leads to future success.

Understand, though, that there’s one trap which must be avoided at all costs. A money-minded teen must never put quick cash ahead of school. There’s a Fresh Prince of Bel Air episode where Will (great name) gets a job at a car dealership. He’s making such good money that he wants to drop out of school.

But his uncle reminds him to think long term. In the long term, he’s better off getting a degree and getting a higher paying job.

If you want to be a wealthy teen (relative to your peers), it means work and class typically take up 12 hours of your day. But it’s worth it. As the saying goes, “It’s good to bare the yolk in your youth.”

You learn life lessons early and your compound interest begins. And you simply have the energy to do the work while you’re young.

If you want to be a wealthy teenager (relative to your broke friends), do what we did. Work hard, think beyond the walls of your school, and focus on the long-term game.

WHERE SHOULD WE SEND
A Day in the Life of a ‘Wealthy’ Teenager?