If your students are nearing graduation it is important for them to have serious conversations about money with their parents. Using this article, help them understand how to navigate this tricky conversation. 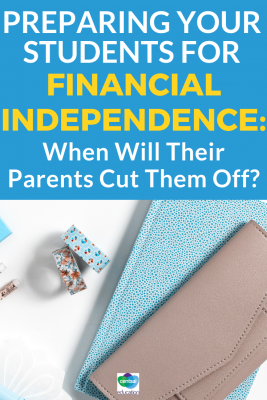 Ignoring a problem does not make it disappear. Though that is kind of what I did after high school.

When I graduated high school, I assumed I would be responsible for all of my expenses. That’s one reason I worked so hard in high school and saved so much money. Because when you know a need is coming, it’s always best to prepare.

My brother and sister (twins) are two years older than me, and I realized after graduating that Mom and Dad still paid for a lot of their expenses. So I assumed they would pay for a lot of my expenses, as well. That was such a messy way of doing things — not knowing and assuming instead.

Mom and Dad never explicitly said what they would or would not be okay paying for. It made me very anxious, but I could never get them to commit to anything. Fifty percent of tuition after scholarships. Transportation costs. No medical assistance, but toiletries paid for —  something! It would have been helpful if I knew that in advance.

I never knew what my parents would pay or what I would have to pay. Honestly, I think it depended on their mood. Here’s what happened…

I began paying for most things on my own — I’m way too anxious to let someone else have that much control over anything. Would they pay? Wouldn’t they pay?

But there were things like major medical expenses I was more than happy to have them pay. But then that stopped in an odd fashion.

Have the Conversation Early

If you’re the youngest child in the family, you may understand. What happened was my parents stopped paying for medical on a certain date (I don’t like to remember that date). Yes — the cutoff did not go by age but rather by one set date. So my sister and brother got two years and three months more help in life than I got.

It is unfair. No one can argue that. But I’m not resentful because I understand that our parents don’t have to give us anything once we reach the age of majority. So it’s fine.

But I think parents and children should outline exactly how expenses will be covered.

If you know your car repair will not be sponsored, you will keep at least $500 in the bank. Same if you know that you need to allocate money toward your own cell phone plan since you’re on your own now. Things like that. It’s just helpful when everyone knows what’s going on.

Getting my parents to commit to anything feels like a mental game of herding cats. But while I was unsuccessful in this, that doesn’t mean you will fail.

Rather, I can see most parents being happy to discuss future expenses with their children. Getting this done in one swoop means the topic doesn’t need to come up every time a bill comes in the mail. That would be an amazing feeling, wouldn’t it?

Knowledge, I believe, is a huge part of financial success in life. And knowing how much your parents are going to chip in — and for what — will be a huge incentive for you to fill in the blanks.

WHERE SHOULD WE SEND
How to Talk to Your Parents About Money Before Graduation?