There Are Cooler Ways to Stand Out than Upgrading Your iPhone 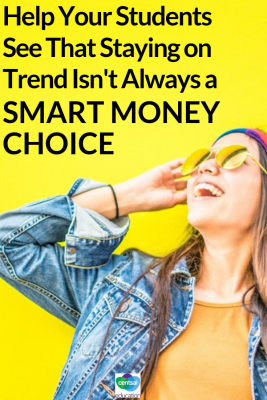 What’s the number one reason people overspend? Probably to impress others. You can see this just by looking at your environment. If you live in California, it’s going to be a lot harder to keep your wallet sealed than if you live in Kansas.

It’s okay to care what others think to a certain extent. After all, no one wants to be a lone wolf (despite it sounding kind of cool).

But more importantly, it’s wise to be who you truly are.

If you want to be someone who is financially successful, there’s little reason to spend wildly while you’re young.

And yes, buying something expensive is a good way to stand out. But what makes you stand out more, in the long run, is to avoid overspending. Think about it like this: Kanye West has so many gaudy gold chains around his neck that he’d drown if he fell into a lake.

Meanwhile, Bill Gates is best known for giving money rather than spending it. Which person will be remembered? Which person is actually living a fulfilling life?

Stand out by not standing out. Drive a cheaper car, even after you get a good job.

If you’re happy with it, keep your current iPhone. People will wonder what you do with your money. What I’ve seen happen is people start speculating, and everyone believes you have even more money than you do.

Kind of like in the book (and the later movie), The Great Gatsby. Leonardo DiCaprio (I never read the book) was rumored to be superhuman – richer than any man alive – simply by keeping his life private. Although yes, he did spend some money.

You don’t want to save every penny you earn. That’ll get you a reputation like… what’s that character in that Christmas book…? (Checking Google…) Yes, Scrooge. Though again, don’t not do something just because of how you will be perceived. Spend on what matters.

By being thrifty early in life, you’ll get used to it. Saving 50 percent of your income will be easy peasy. What’s hard is when people overspend, and then later have to move into a cheaper apartment, sell their expensive car, and/or begin working three jobs because they realized they spent too much early in life. Downgrading your lifestyle is a depressing thing to do (I’ve heard).

I’m now 26. I probably overspent on my first car, but overall, life’s been a steady curve upwards – and it has felt phenomenal.

You may think it sounds hard to not spend everything you have. But what I’ve noticed is that once you have the money for something major, the desire for it usually (basically always, if you give it enough time) goes away. Perhaps that’s because getting there is the real reward. Successful people rarely talk about how great it is to have money. They talk about the accomplishments that got them there.

Great. Now I have that Miley Cyrus song in my head…

Ain’t about how fast I get there.

Ain’t about what’s waiting on the other side.

WHERE SHOULD WE SEND
There Are Cooler Ways to Stand Out Than Upgrading Your iPhone?