Beater Cars: The Pleasures (And Pains) of Driving a 1996 Olds

Did you inherit a beater? Is it ugly? Slow? Does it have a head-bangin’ cassette deck? If you answered “yes” to any of the above, no worries! I’m about to show you how you can learn to appreciate the car for all it is – and all it isn’t. 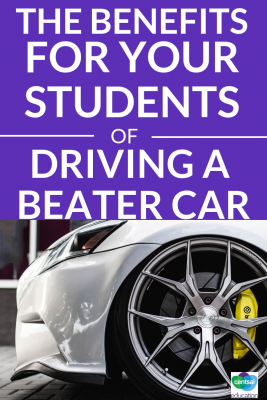 When I was in high school, I had a pretty cool car. A year after I got it, my parents’ car got wrecked. It was old and had 300,000 miles left on it – no joke. The moon is about 239,000 miles away. The dealership would understandably only give them $1,000 on trade. I convinced them to keep it as a spare car. Somehow, they agreed.

I still had my “cool” car. It was relatively quick, good-looking and fun. So of course I wouldn’t drive my parents’ 1996 Oldsmobile 98 much, right? Wrong. I drove that thing more than my nice car! (P.S. Google Oldsmobile 96 if you haven’t heard of it. It is in no way a sexy car.)

Driving a nice car has its place, but driving a beater can be a blast, as well.

For starters, you don’t care about it as much. You’re not insanely worried about getting door dings or having it break while trying to do burnouts in the school parking. The car is so cheap that there’s really nothing to lose. It’s also cheap to insure.

Unfortunately, not everyone thinks positively. I had a friend who got a hand-me-down car. He tried wrecking it by jumping the truck through a rough intersection and ruining its suspension. He actually ended up causing a mild five-car pileup at that intersection – on a dirt road, nonetheless. His parents were not happy, and his beater truck lived to see another day. Beaters are generally strong. It’s how they were able to survive so long in the first place.

My happier friends found ways to enjoy their beaters. One of my friends had a beater even older than my own. One time, a girl took his favorite parking spot at school. He took his car and pushed hers out of “his” spot. He wouldn’t have done that with a Lexus. Her car was a beater, as well, so she wasn’t mad.

I had another friend who gave his car a homemade paint job. It actually looked so stupid it was cool.

In a hipster sort of way, you know? Like a gas station t-shirt with an airbrushed image of a pug AND a wolf howling at the moon. Sweet.

Other people just slightly modify the car to make it their own. They upgrade the stereo, the wheels – whatever it takes to make it feel cool. It’s pretty smart. After all, it’s a lot cheaper to personalize an old car than buy a new one. You don’t need any formal training to do any of this stuff. YouTube videos are glorious. Though you should avoid doing any major modifications, since problems always arise. But for stereo, wheels, and such, you’ll be fine.

Another thing you can do is go online and see if your beater has a cult following. Life is all about perspective, right? While you may not see the desirability of your car, others might. And their passion may inspire you. Pretty soon, you’ll be in love with the car. Google the name of your car and the word “forums” to find your people.

Finally, change your state of mind. There’s always a way of making a negative thought into a positive one. I don’t want to get all hippie on you, but it seems like that’s just how the universe works. There’s a balance.

With that said, instead of thinking of your car as dead weight, think of what it’s giving you. It is helping you save for college. It’s keeping you from the stress of maintaining a nice vehicle. It’s pretty great, really. It’s like a mighty car that’s helping elevate all the other areas of your life.

But wait – a beater car loses all of those trophies if it gives you problems.

If your car is worth about $1,000, it could go on life support in a heartbeat. If any of the following go wrong, it’s time to consider upgrading to a better car:

When choosing a future beater car, find your sweet spot. You want the car to be cheap, but not so cheap that it breaks all the time. Ten years old with 100,000 miles should do the trick.

Learn to love your hand-me-down car while it’s yours. You’ll be both happier and richer because of it.

WHERE SHOULD WE SEND
Beater Cars: The Pleasures (And Pains) of Driving a 1996 Olds?