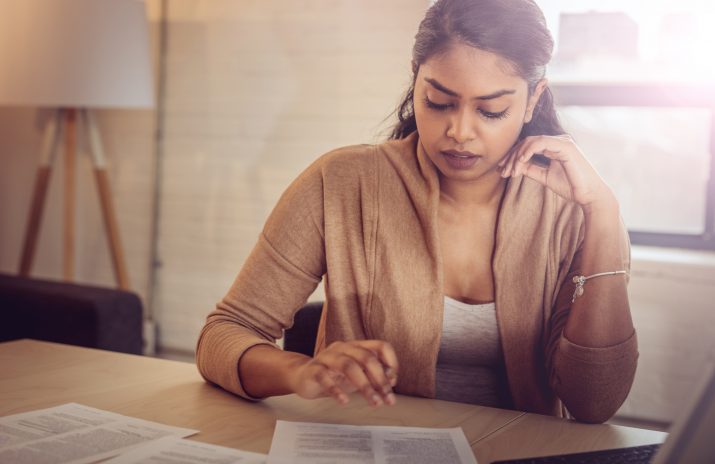 Many Americans are overwhelmed by debt. Payday loans are becoming an increasingly common short-term solution for many people when it comes to covering recurring expenses such as rent, utility bills, food, and credit card bills (see “Payday Lending in America”). With more than 20,000 storefront payday lenders in United States, including those that are accessible online, the growth of the industry has raised many concerns about its lending practices. Since many of the storefront payday lenders are located in neighborhoods where there is a higher concentration of people of color, some critics charge that the lenders are profiting off the most vulnerable. These neighborhoods are also where residents tend to be less educated and have a higher rate of poverty, and where the highest percentage of the “unbanked” and “underbanked” — those with a nominal bank account and no or low credit scores — live. As such, the prospective payday borrower’s access to small loans is constrained. Additionally, storefront lenders are usually located where more single heads of households (typically mothers) reside.

The criticism also concerns the structure of the payday loan, specifically the fees and the terms of repayment. While the average amount of such a loan is relatively small ($100 to $1,000) and contracted to be paid in a balloon payment (paid in full, with no partial payment accepted), studies have shown that an overwhelming majority (more than 80 percent) of payday loans are renewed or rolled over. The term of the loans is generally short — a week, 14 days, or a month being the most common — with a due date geared to coincide with the borrower’s payday (see “Payday Borrower Pay Frequency”). Because of the considerably high frequency of renewals and rollovers of payday loans, there is also concern about the duration and effective payoff amount of the loan (see “The Payday Loan: Cycle of Debt” below). According to a Pew Charitable Trust study, a borrower will typically take an average of five months and will fork over more than $500 in finance charges. (Yes, this $500 is in excess of the original amount borrowed!) Repeated renewal or rollover of a payday loan may lead to a cycle of debt that becomes increasingly difficult to break. Almost $9 billion is paid by Americans in interest and fees on payday loans each year.

The “$300 Loan Comparison” chart below shows a comparison of a typical payday loan and a traditional small loan with a bank. The payday loan fee, relative to the term of the loan, which results in a whopping 391 percent annual percentage rate (APR), which is stunning when compared with the 10-percent APR for the traditional bank loan (or even 18 to 30 percent when using the typical credit card).

Under federal Truth in Lending Act requirements, lenders must disclose the fees and the finance charged as an annual percentage rate (APR).

How Do Payday Loans Work?

Since a borrower only needs to have proper identification, proof of income, and a checking account at a bank or credit union in order to qualify for a payday loan, the relative ease of accessing funds quickly is considered a necessary convenience by some. The borrower will usually be asked to provide the lender with a signed check for the full amount of the loan (plus the fee), dated with the due date (one week, two weeks, one month — whenever the borrower’s next payday is). Alternatively, the lender may receive an authorization to withdraw the full amount of the loan from the borrower’s bank account on the due date.

In a storefront transaction, the borrower is expected to return to the lender on the due date to pay off the full amount of the loan or renew or roll over the loan. Should the borrower renew or roll over the loan, the payday lender keeps the fee and makes a new loan or rolls over the existing loan, including a new fee. If the loan is not repaid, the lender keeps the check and either cashes it or electronically withdraws the funds from the borrower’s bank account.

In an online transaction, the full amount of the loan — including the fees — are automatically deducted from the bank account on the due date of the loan, unless the borrower desires to renew or roll over the loan. If the loan is renewed or rolled over with an additional fee, the lender withdraws only the original fee. Most payday borrowers say that if they needed alternatives to payday loans, they would cut back on their expenses or delay paying some of their bills, according to another study by the Pew Charitable Trust. But to what extent are these alternatives realistic, considering the expansion of both online and storefront payday lenders? To give you an idea of the magnitude of this expansion, the number of payday lenders now exceeds that of MacDonald’s restaurants.

Pew also reports that 2.5 million American families use payday loans each year. The extent to which low income, poverty, and poor money management skills contribute to increasing debt loads may also be a major factor in increasing payday loan originations.

Based on what you have learned, consider the following scenarios and decide the best course of action in each.

Ricardo, 22, and his fiancé Ava, 23, have recently been hired to work part time at the supermarket in their neighborhood. They are excited about starting a new job because they have been out of work for some time: Ricardo for nearly six months, and Ava for more than four months. They both previously worked in retail — Ricardo for two years in the men’s sportswear department at J.K. Ryan, and Ava for nearly four years at Digital Hut. Both retail outlets are part of major chains that have closed nearly 100 stores over the past two years. Ricardo’s unemployment compensation was about to expire, and Ava had only less than one and half months left before her unemployment would end. So things are looking up!

One week into their new jobs, they learn that the brakes on their car need to be replaced. The cost of the repair is estimated to be about $800. However, neither Ava or Ricardo has enough saved — together they have $500. On top of that, they are already maxed out on their credit cards. No one in their respective families will loan them the money they need. Ava’s aunt tells her that they should be able to get a loan at a payday lender located in the same shopping plaza where they now work.

So Ricardo and Ava end up getting a loan with this payday lender, agreeing to borrow $400 of the $800 that they need. They are loaned the $400 and charged a $75 fee. After giving the lender a post-dated personal check for $475 made payable to the lender, Ava and Ricardo are given a $400 check, and the lender retains the remaining $75. The loan is due to be paid off in two weeks. What should they do?

For the past year, Khalil, 20, has been a delivery-services provider with Most Contact in the Washington, D.C. area. He is responsible for making all types of deliveries, including dry cleaning, groceries, orders from fast-food restaurants, and more.

Because he has no car, Khalil uses his bicycle. Unfortunately, the area was recently hit with one of the worst snowstorms in decades, making travel, especially by bicycle, dangerous. Those employees of Most Contact who have SUVs or trucks actually see an increase in their gigs, while Khalil and others who rely on bicycles experience a decrease.

Khalil has bought a new refrigerator and stove under a “six months same as cash” plan which requires him to pay the combined $1,400 in that time or incur a hefty finance charge. Since he made no payments during the six-month period, the finance charge could be as high as $300. And he has managed to save nearly $1,000. Therefore, Khalil decides to take out a payday loan for $500 (he will use $900 of his savings to pay some of the $1,400) and writes a personal check to the lender for $600, which includes a $100 fee for the loan. Because of the weather conditions, he will have three weeks instead of the usual two weeks to repay the loan. Should he take it?

Marissa, 42, is a single mother of three who lives in Denver. Divorced for six years, she has not been able to rely on child support checks from her ex-husband. She has been employed through a temporary employment agency for most this time. The agency has been quite consistent in finding work for her during this time. Unfortunately, the pay has not been equally consistent with each of the temporary positions.

While she is aware of the “fight for 15” minimum-wage movement, she has accepted positions for less just to keep working regularly.

Marissa has three children whose school is sponsoring a four-day trip that will include two days at Yellowstone National Park in Wyoming and two days in South Dakota visiting Mount Rushmore, the Badlands, and the Crazy Horse Memorial. The cost per child is $450. However, there is a sliding scale for parents with more than one child. The total cost comes out to $900 dollars for Marissa, a conscientious parent who tries to make certain that her children do not miss out on a significant events like this. Unfortunately, they missed out on trips the past two years, and she feels she owes them this opportunity.

Marissa’s credit card has a limit of $500 dollars, and she has an outstanding balance of $350. She has savings of about $2,500 — a balance she tries to maintain in case of an emergency — but decides to take $500 from the amount to help pay for the trip. Her mother, a retired widow, will give her $100 toward the trip. A friend at work suggested that she go to a payday lender for the rest of the money that she needs. In order to get the $300 loan from the lender, Marissa will have to write a personal check in the amount $375, which includes a $75 finance fee. The loan has to be repaid in 14 days. Should she take the loan?

Currently, Aliyah has a payday loan outstanding. She borrowed $400 dollars so she could get Christmas gifts for a few of her friends. The loan was originally for $485, but when the loan was due in two weeks, Aliyah had only $285. The loan contract does not allow for partial payment. She paid the $85 finance charge and set up another contract for $485. During the next two weeks, Aliyah decided that she would go out to dinner with some friends, then to a concert featuring Drake, 2 Changz, and Young Thug. She also decided she should get a new outfit for the evening.

When the loan was due this time, Aliyah was short of the full $485 by $300! She paid the $85 she owed for the loan and rolled over the loan for another $485. What is the problem, and how can Aliyah correct it?

WHERE SHOULD WE SEND
Alternatives to Payday Loans: A Case Study?