4 Tips To Ace Your Salary Negotiations 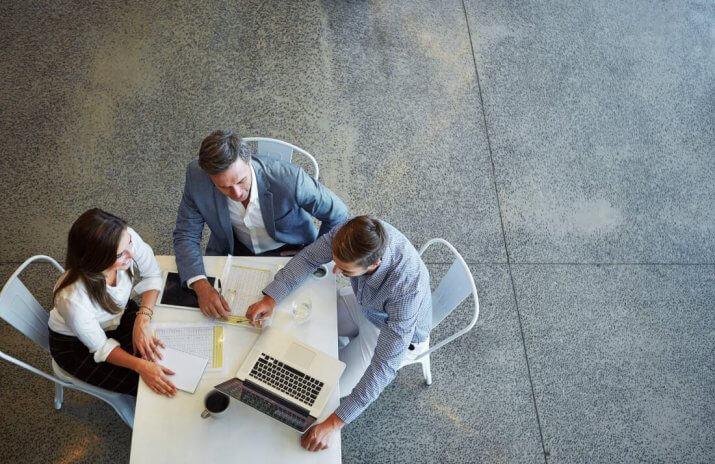 5 Tips To Ace Your Salary Negotiations

In a few years, your students are going to be entering the workforce. A skill they may not learn in high school or on the way to a degree is how to negotiate their salary. Teaching them this skill now will make it easier for them to earn more and have a successful future! 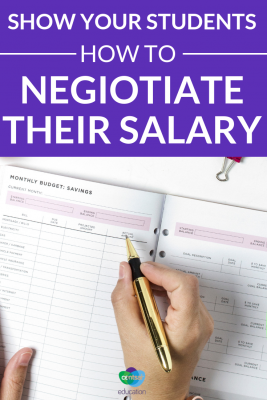 Many companies conduct some type of annual performance reviews with each of their team members. Like it or not, your review is a great time to touch base with your boss about how things are going. And if you’re like many people, you might also think it’s the perfect opportunity to talk about a bump in your salary. Are you breaking into a cold sweat at the thought of chatting with your boss about a pay increase?

You’re not alone — pretty much everybody dreads these conversations, likely your boss included. Here are five key tips to help you ask for a raise (hopefully without needing to breathe into a paper bag):

As with anything, timing is crucial. Unfortunately, there’s a bit of conflicting advice in regard to when it’s the best time to approach your boss about your paycheck.

A good time would be during your review. After all, you’re already discussing your performance, accomplishments, and contributions, which can often provide a natural segue into a discussion about compensation. Plenty of people use their reviews as a launching pad to ask for a raise.

The bottom line? The best timing can vary from company to company. So pay attention to cues as to when might be an appropriate period to approach your boss, and go for it.

Of course, marching into your boss’ office and demanding more money won’t be an effective tactic. You’re going to need to lay some groundwork ahead of time.

Ideally, you’ll have kept track of your major accomplishments throughout the past year. (If not, make sure you start doing it!) Put together a list of the things that you’ve achieved and the impact (ideally financial) you’ve made at the company.

Remember, you can’t ask for a pay increase without having the justification to back it up. So prepare yourself with a solid roster of the reasons why you deserve a bump in your paycheck.

The most important way to build confidence to negotiate with an employer is to be prepared, get rid of negative assumptions about yourself and your boss, and spend a few minutes to calm your mind before the meeting, according to salary negotiation coach and compensation consultant, Kate Dixon.

Another thing you’ll need to come prepared with? Exactly how much you’re asking for. You don’t want to get into the discussion with your boss, only to respond with, “Uhhh… more than I’m making now?” when she asks what your salary expectations are.

Determine a figure before you ever sit down with your manager. Whether it’s a percentage increase or a particular flat salary you’re aiming to earn, it’s important that you have a number in mind. Even if your boss doesn’t end up agreeing to that exact number, it will at least give you some grounds to start negotiating.

Doing your research will help immensely. Before taking a job, Diana* used Glassdoor, Comparably, and Payscale to see what jobs with similar titles paid. She showed her potential employer what she had to bring to the company, and while she asked for more than she received, she felt good about her effort and accepted the offer, especially since it was the first time she had negotiated, and the company offered her other benefits — like working from home part-time — that were worth it for her.

Some companies will ask for your salary history or your previous salary. They use this to determine your potential “worth,” or what they can expect to pay you based upon your previous earnings. You may feel that you have to disclose, but you don’t have to, believe it or not!

“If you get asked about your pay history, it’s fine to redirect the conversation,” says Dixon. “In many states, asking a person’s pay history is actually against the law, and for good reason: using pay history to inform future pay decisions just perpetuates inequalities in pay. So, how to do it? Redirect with your pay expectations.”

“I recommend my salary negotiation clients respond with a “here’s what I’m targeting” answer,” Dixon adds. “Like: “My research shows that jobs like this one are paid between $X and $Y in the market. I’m targeting the higher end of that range.” Or, if you don’t feel comfortable going first, it’s fine to say: “Without knowing more about the job and your total rewards package, it’s hard for me to give you a hard number here. If you can share your hiring range for the job, I can tell you if we’re in the same ballpark.”

Let’s face it — no matter how well-prepared you are, talking with your supervisor about salary can still be an incredibly nerve-wracking experience.

This is why practicing beforehand can help to calm some of those inevitable butterflies in your stomach. Rehearse the spiel that you’ll recite to your boss when asking for a raise. Then, run through some of the different ways the conversation could go — whether that’s approval, negotiation, or rejection. You can even ask a friend to help you out.

It might seem like a totally unnecessary step, but reserving some time to explore potential scenarios ahead of time will help you feel that much more self-assured when you actually approach your boss, because feeling comfortable with negotiating is an important step.

Not negotiating an initial salary, for whatever reason, may cost you over the course of your lifetime. If you are offered $45,000 and a 2 percent raise every other year, but your co-worker negotiated $50,000 with the same 2 percent raise every other year, then you will essentially be missing out on more than $25,000 across just the first five years. Negotiating can be nerve-racking, but it won’t induce panic if you prepare effectively.

There are many options to be weighed when stepping into a salary negotiation, between benefits, titles, and raises. It is important to consider which of these options you value the most before you meet with your boss. You already know your worth, but do you know how to leverage your worth during the available negotiation paths?

Jenna* has been at her company for more than three years, with the one-year anniversary in her current role coming up. She wanted to make sure that her name was included in the running for a raise in October — one of two times during the year when raises are given.

Jenna strategized by approaching her manager, with whom she has a good relationship, and checking in on her position. It has changed since she was hired, and she now manages more people and has implemented a system to help meet target deadlines effectively.

Her boss was vague about the possibility of a raise, and because the company is going through budget cuts, it’s difficult to know if she will get one. They did offer her a change in title, but she was adamant that she is more interested in addressing her salary, rather than her title.

While Jenna isn’t sure what she will do if the company refuses to grant her a raise, she frequently checks job postings simply to see what else is out there in her field. She may consider negotiating other benefits, but the way her job is structured now makes it hard to take the vacation time that she already has or to telecommute.

Lila* was offered a job recently. And though she got almost everything she asked for, she decided to turn down the offer after realizing that she wouldn’t be happy in her new position. Being able to turn down an offer after having considered it is also part of your confidence-building process.

Negotiating is a skill that doesn’t always come naturally. Do your research, practice with friends and family, and know that sometimes you have to be creative. Set your absolute minimum and never compromise any offer below that. And yes — always ask. Unless you ask, your employer can turn around and say, “But you never asked!”

While there’s never a guarantee for how this conversation with your manager might go, following these five steps will ensure that you ask for a raise in a way that’s poised, professional, and polished.

And if you’re rejected this time around? You can take comfort in the fact that you’ve made your wishes and goals known to your boss.

WHERE SHOULD WE SEND
5 Tips To Ace Your Salary Negotiations?