Can Teens Help When A Parent Is Laid Off? | CentSai

Many students watch their parents, family members, or friends struggle with unemployment. How can your students help during that hard time? Read this article in class — perhaps speak about resources available to those unemployed — and ask your students questions about the two teens in this story, and how they reacted. 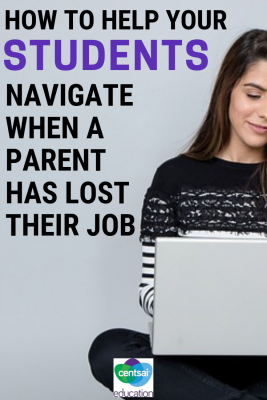 There are many wonderful moments most teens relish — your first time behind the wheel, graduating high school, going to prom — but none of those moments are as strong in my memory as the day my dad lost his job.

I remember it clearly, even though it’s been ten years. My mom had warned my sister and me that “something had happened,” and that it wouldn’t be a day to ask for anything or to act up.

Since my parents were divorced, we spent the rest of the evening guessing at what it could have been. But nothing would have prepared us for the news that my dad had lost his job at the business where he had worked for nearly half of our lives.

Almost immediately, changes began happening. We started seeing him less and less as he picked up odd jobs as a laborer around the state. Then there were fewer gifts at Christmas. Despite the fact that my sister and I were the children in the situation, we couldn’t seem to avoid being dragged into such an adult experience.

What to Do in This Situation

M.T.* is going through this situation now. Both of her parents lost their jobs recently and have been unable to hold any steady job for the last five years. “Every time I think it’s going to get better, it gets worse. They don’t try to bring it up, but I know we don’t have much money coming in, and sometimes I worry about if my mom can pay for groceries. I don’t know what I can do.”

M.T.’s struggle isn’t uncommon. Parents don’t always realize that a job loss isn’t just isolated to them. Teenagers like M.T. can feel the same amount of sadness and uncertainty as their parents, even if the teens are not the one losing their job.

And with that feeling often comes the desire to make the situation better for everyone involved, and to feel less powerless.

Of course, the most obvious solution for a teen is to get a job, if you don’t have one already. It doesn’t have to cover the mortgage bill, but even a weekend babysitting gig or a few lawn-mowing days can go a long way. This may even be a great time to consider starting your own business or, with the help of your parents, selling some of your old childhood toys and clothes online.

However, there is a big “but” here that is important to remember. After a year, M.T. started working to bring in some income to the family after school. Within a few months, she began to feel run down and bitter.

That’s when her parents suggested that she take her paycheck from her fast food job and babysitting sessions and split it up into some percentages. Twenty percent went to her personal checking account for “fun,” 50 percent went into the family fund for utilities and the internet, and the other 30 percent went into a personal savings account.

“I hate to admit it,” M.T. says, “but I really hated giving them money, and I didn’t make them feel really good about it, either. But when they suggested splitting it up, I felt less like I was being taken advantage of. And because I know where my money is going within the family fund, I have some control of the situation, too.”

Finding Ways to Make It Work

Working was a big part of how I helped contribute to my family when I was a kid. In addition to a paycheck, I also tried to make life a bit easier for my parents. My sister and I became more independent so that my dad had more time to work on his interviews or travel to job sites. We picked up groceries and helped shop for birthday gifts. We even became really focused on being a more frugal family by searching for coupons in flyers and suggesting game nights over going out to eat.

A parent’s job loss isn’t just about Dad sending out résumés or Mom managing money better. A job loss affects the whole family. By thinking creatively about how you can contribute (while still being financially smart), your family can get through this downturn together.

WHERE SHOULD WE SEND
Can Teens Help When a Parent Is Laid Off??