Network Like Your Future Job Depends On It - Centsai Education

No matter what kind of career or life your students decide to pursue, they will need to learn how to network. Even if you have a student who is outgoing and talks to others easily, networking is still a skill that needs to be practiced and learned. 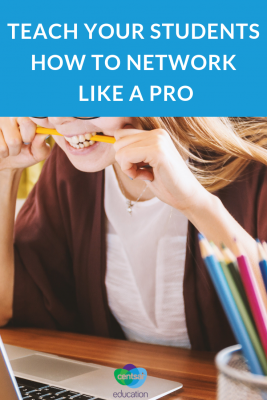 Let’s be honest: Most freshmen will end up changing their minds about what they want to do as a career. . I did. I began university with the idea that I wanted to become an economist. Then I got teased and peer-pressured out of that field (“Isn’t economics for old white guys?”) and ended up pursuing a degree in political science.

At the time, no one told me that I was squandering some great future professional resources, so I thought I would share some guidance on what to do and what not to do as you move through your education.

Stick With at Least One Thing

As a student, I vaguely knew that I should try to work the same job for as long as possible. Even though I job-hopped a bit during college, I worked in the same department for most of my time there. I usually held more than one job, but I always worked in food services so that I could continue to eat while exploring other interests.

Working for extended periods of time in one department looks great on your résumé. Your future employers love to see that you already know how to work and that you’ll stick with a job. Once you leave school and begin working in the “real world,” you’ll have a network of people who know you well, and your future employer will value the soft skills that you acquired through work.

In my previous role as a supervisor, I worked with students on soft skills that some employers may take for granted — things like interpersonal communication, punctuality, accountability, and coping with criticism. There are some people who “get” it. There are many others who need refinement of these skills.

When you begin to look for jobs, you will need to provide references. These are people in your network who can speak to your ability and professionalism.

How do you identify these people? They could be almost anybody in your network: your current supervisor, a teacher or administrator who you still keep in touch with, or the head of a small organization that you volunteered for four years in a row. The key is to develop substantive connections who can provide a great reference when you need it.

Why five potential future references? Because not everyone will be available at the same time. You can also pick two from the five as most suitable for the position that you’re applying for. Remember that not all references are created equally.

Cultivate and Maintain Your Online Brand

Clean up your online presence: political posts, weird photos, and any content that may be considered questionable by any future employer.

Get in the habit of being a lot more self-aware about the information that you’re posting about yourself. You are your own brand. There have been numerous reports of people losing jobs due to online comments made in the past. Remember, what you post on the internet lasts forever.

Get assistance with creating a professional profile on sites like LinkedIn. Know how to work in the space where your future employers already exist.

You don’t have to always agree with them or even fully understand what they’re saying, but the ability to listen to and respect other points of view is a great skill to have.

Ultimately, the process of networking is all about creating and maintaining relationships with people who you know, like, and trust. Networking doesn’t have to be intimidating or scary. In the end, just be yourself.

WHERE SHOULD WE SEND
Network Like Your Future Job Depends On It?