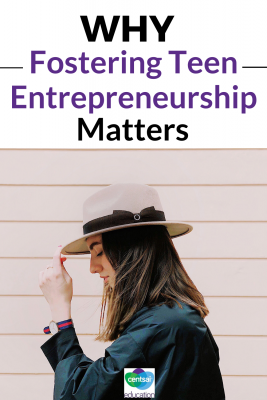 When I was a child, entrepreneurship entailed convincing my parents to buy Kool-Aid mix and add water and ice to a pitcher – voila, insta-business for a day.

With my crayon-drawn sign in tow, I set up my stand and charged people 25 cents for a Dixie-sized cup of Kool-Aid in the sweltering Nevada summer sun. I am not sure that I made a profit once I consider the cost of my supplies, but I was entertained – and out of my parents’ hair – for an afternoon.

Today’s youth entrepreneur movement is far more sophisticated. A poll conducted by CentSai Education of 1,982 teens aged 14 to 17 found that 35 percent said that they planned to start their own business.

The majority of respondents said that they already had the skills to run a business, and 45 percent would fund it with personal savings. And these teens are not starting Kool-Aid stands. While some might see these statistics as a nod to youthful naiveté, these teens are serious.

Make no mistake – these young women and men still value education. The CentSai Education study says that 75 percent of them still want to go to college.

This determination – their learn-and-earn grit – is real. I saw it first-hand last month. I was at the first-ever Teenpreneur Conference, founded by Eva Baker, a teenpreneur and financial blogger at teensgotscents.com. It was held in Jacksonville, Florida, where I witnessed teens full of enthusiasm and determination.

One of them – Colby Dunkley, the founder of year-old Groovy Cheddar Tiedye – has been making tie-dye shirts since she was four. Today, she sells t-shirts ($12) and hoodies ($25) on Etsy, and has plans to expand to more customers through her presence on Instagram and Facebook.

There were scores of teens like Colby. Eugene Holsey, 14, makes bracelets, as well as dog collars and dog leashes with paracord (parachute cords). He is gaining popularity among ex-servicemen and women. He sells items at a price range of $5 to $25, and describes his business as “self-sustaining.” Wall Street would call him “cash flow positive.”

Sade Ried, also 14, and the founder of Math Sade Way is tutoring students from second to eighth grade for $10 an hour in math – a subject that she says has always come easily to her. She aspires to create a math app that scans a problem then gives the user the steps on how to solve it. Her mantra: “Today’s world works by making people’s lives easier.”

Eugene, Colby, and Sadie hold this nation’s economic future. Most of us Generation Xers have grown up to believe that we were losing jobs to China and Latin America – and yes, we have. But as part of economic evolution, we are also witnessing not just innovation like Uber and Tesla, but also a young generation that brings enthusiasm, determination, and willingness to stand on their own two feet. They want to thrive and make real things.

A remarkable source of encouragement comes from their parents. They are known as “momagers” and “dadagers,” and are a new breed of C-suite executives.

Tamara Lewis recalls when her 15-year-old daughter, Zandra, had her “aha” moment:

“The light bulb went off for Zandra when she came home with money in her pocket from selling lip balms at church.”

From that experience, Zandra was born – an online beauty boutique that sells lip balm and body butter, and that is dedicated to giving a portion of her profits to empowering women and girls.

While reluctant to talk revenue, Lewis is crystal clear in her dual role as Zandra’s business manager and mom. “We schedule everything. As her mom, I need to be sure she is eating and sleeping well, spending time with friends, and that she is meeting her obligations to her business.”

One similarity I found with all teenpreneurs is how social media was a phenomenal resource, business teacher, and enabler all in one.

Take Jordon Cox, 19 – aka “The Coupon Kid” – a blogger and vlogger for moneysavingexpert.com, one of the U.K.’s top couponing sites, who became a national hero after exposing “rip-off fares” when he discovered that flying from the north of England to London via Berlin was less expensive than the cost of a train ticket within the U.K.

Dubbed the ”six-foot-five in. teenage brain box,” he focuses on his passion – couponing – and now speaks all over the U.K., giving advice, building his brand, and becoming a force to be reckoned with.

As parents, we have a role to play – a huge one. In Tamara Lewis’ own words: “Do not kill your kid’s spirit. It keeps them from taking risks as adults.” Clearly, for Zandra and these other budding teenpreneurs, the sky is the limit.

WHERE SHOULD WE SEND
Why Fostering Teen Entrepreneurship Matters?